This package contains a collection of datasets that are designed to accompany the book “Forecasting with Exponential Smoothing: The State Space Approach” by Rob Hyndman, Anne B. Koehler, J. Keith Ord, and Ralph D. Snyder (Wiley, 3rd ed., 1998). The book can be purchased here. 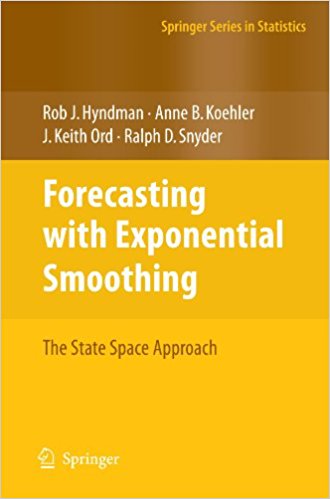 When the expsmooth package is loaded, the forecast package is also loaded, providing the functions to fit and forecast with exponential smoothing state space models.

This vignette will replicate Section 2.8 from the book, and provide worked solutions to some of the exercises in Section 2.9. The forecast package has been updated since the book was published, and some of the resulting model estimates may be different from those in the book. Figure numbers are taken from the book.

A graph of a time series often exhibits patterns, such as an upward or downward movement (trend) or a pattern that repeats (seasonal variation), that might be used to forecast future values. Chapters 1 and 2 reference four data sets that are included in the expsmooth package.

These time series are shown in Figure 1.1 which is reproduced below:

This part of the vignette will follow the methodology described in Section 2.8 of the book, and reproduce the results that are reported there. This also provides answers to Exercise 2.3 and Exercise 2.4.

The estimation and model selection are performed by the ets() function and the forecasting is done by the forecast() function. These are both a part of the forecast package. A basic introduction to using these functions is given in Section 7.6 and Section 7.7 of “Forecasting: Principles and Practice” by George Athanasopoulos and Rob J. Hyndman.

The automatic forecasting process will by carried out for each of the four data sets. The process will be explained for the first data set, and the relevant results will be reported for the others.

The ets() function is used to apply all appropriate models (optimising parameters in each case), and then it also selects the best model according to the AICc. The AICc is the default penalised likelihood, but others can be specified.

The autoplot() function can then be used to show the states over time.

The autoplot() function can then be called on the forecast object to produce the graph shown in Figure 2.1.